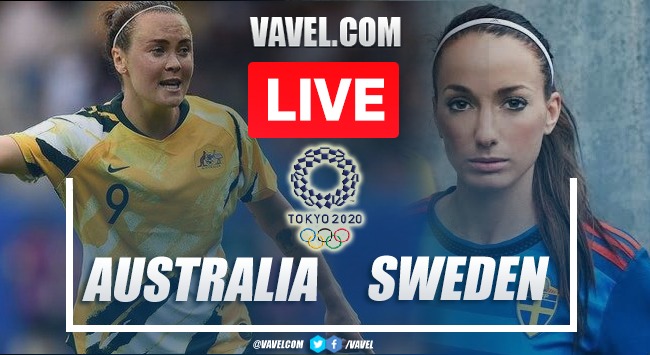 Sweden gets its ticket to the final after beating Australia 1-0 and securing a medal. Gold will be defined between Canada and Sweden, United States and Australia will fight for bronze.

Capenter gets the red card

Lindahl releases the ball in the penalty area, Kerr was lively to finish.

Australia wants an equalizer and insists with presence in the area

Angeldal tried to surprise with a long shot but the action did not escalate.

GOOOOL. Rolfo makes it 1-0 for Sweden with a goal from the locker room.

The teams go to the halftime break with the score tied at zero.

4 minutes of compensation for the first half

Kerr finishes off a first-time set piece to set up the first goal but the action is disallowed.

Kennedy’s set piece is met by a great save by Lindahl.

Kerr found space and positioned herself alone in front of the goalkeeper. Good comeback from the back

Van Egmond wanted to surprise with a long shot from the right side but the ball goes wide of the goal.

Cross for Sweden. Rolfo doesn’t stop trying and with a shot from half distance he makes the goal vibrate.

Blackstenius has a shot on goal but the shot is weak.

Australia set up the ball well and got the dangerous cross.

Diagonal in the Swedish team’s area. Corner kick from the left

This is how the Swedish team takes the field for the start of the match: Lindahl, Glass, Ilestedt, BjÖrn,Ericksson, Angeldahl, Asilani, Seger, Jakobsson, Blackstenius, RÖlfo

They want a medal

In the Rio 2016 edition the Swedish team won the silver medal, for Tokyo 2020 Sweden also wants to repeat its podium but its eyes are set on the gold medal.

The United States lost in the other semifinal to Canada and thus opens the possibility for Sweden to establish itself as the great favorite for the gold medal.

We are just a few minutes away from the start of the second key of the women’s semifinals of the women’s soccer semifinals at the Tokyo Olympic Games. Australia and Sweden have already met in the group stage and the Swedes are looking to repeat the feat.

Do not miss a detail of the match Sweden vs Australia live updates and commentaries of VAVEL.

How to watch Australia – Sweden Live Stream on TV and Online?

These teams have already met in the group stage. Sweden took the three points by a score of 4-2. For the Swedes, Lina Hurting, Fridolina Rolfo (2) and Stina Blackstenius scored.
For the Australians it was Sam Keer who scored twice.

Sweden began its participation in these Olympics with a resounding victory against the United States with three goals to zero.
In their second group stage match they faced Australia who they defeated 4 goals to two.
To close with a perfect pace they beat New Zealand two goals to zero and managed to qualify for the quarterfinals where they dispatched the hosts with a score of 3-1.
Now they want to reach the last step of the competition by beating The Matildas once again;

The Australian squad, better known as The Matildas, want to aspire to the medal and that is why they want a rematch against Sweden.
In their first match of these Olympic Games they opened their participation against New Zealand, where “The Matildas” won two goals to one. In the second match, the Australians lost to the United States, six goals to one, and in the final match of the group stage, they played to a scoreless draw against the Stars and Stripes.

Welcome to VAVEL.com’s coverage of the 2020 Tokyo match: Australis vs Sweden Live Updates!

My name is Alejandra and I’ll be your host for this game. We will provide you with pre-game analysis, score updates, and news as it happens live here on VAVEL