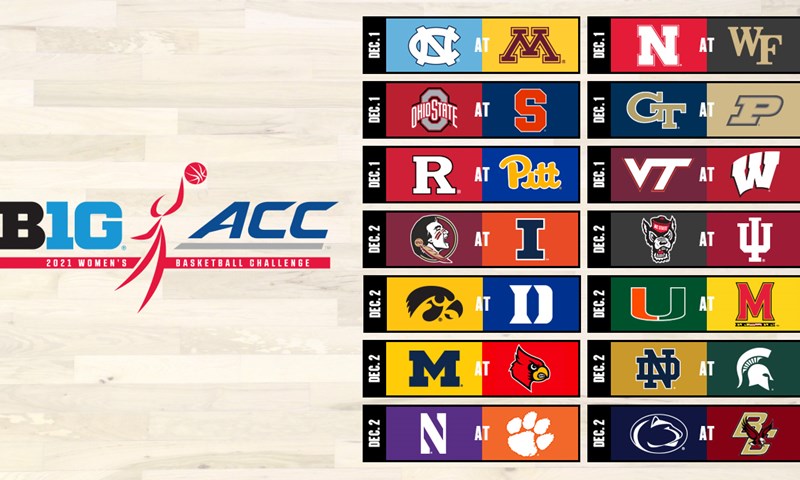 ROSEMONT, Ill. — Two of the nation’s premier women’s basketball conferences will once again square off for hardwood bragging rights, as the matchups for the 14th Big Ten/ACC Women’s Basketball Challenge were announced Tuesday. The annual challenge, which was not played in 2020 due to the COVID-19 pandemic, returns this fall with 14 high-quality matchups, including a rematch of last year’s thrilling NCAA Tournament Sweet 16 game between Indiana and NC State (won by the Hoosiers, 73-70, to send them to their first Elite Eight since 1983).

The 2021 Challenge will take place over two days in early December, beginning Wednesday, Dec. 1, with Big Ten schools Minnesota, Purdue and Wisconsin playing host to ACC counterparts that evening, while Nebraska, Ohio State and Rutgers venture on the road. The following night (Thursday, Dec. 2), Illinois, Indiana, Maryland and Michigan State will serve as the Big Ten host schools, while Iowa, Michigan, Northwestern and Penn State will play at ACC sites.

The last time the Challenge was played in 2019, the Big Ten earned its first victory over the ACC by a 9-5 margin. As has been the case in recent years, the vast majority of the 2019 Challenge games were remarkably close, with 10 of the 14 contests decided by 10 points or fewer, including Michigan’s 84-76 overtime victory over Syracuse. The Big Ten also claimed a pair of wins over ranked opponents in the event, with Ohio State toppling No. 2/2 Louisville, 67-60, and No. 14/16 Indiana winning at No. 21/22 Miami, 58-45.

The Big Ten and ACC have been among the most competitive conferences on the national women’s basketball landscape for many years, with the conferences combining to send 17 schools to postseason play in 2020-21.

The Big Ten had a conference record-tying seven schools qualify for the NCAA Tournament back in March, as Indiana, Iowa, Maryland, Michigan, Michigan State, Northwestern and Rutgers all advanced to the national tournament. For the first time ever, the Big Ten had four schools (Indiana, Iowa, Maryland and Michigan) reach the Sweet 16, with Indiana advancing to the NCAA Elite Eight. In addition, Nebraska participated in the Women’s National Invitation Tournament (WNIT), reaching the round of 16 before falling in the Memphis Regional semifinal.

Last season, the ACC had eight women’s basketball programs participate in the NCAA Tournament, while a ninth ACC school competed in the WNIT.

The complete schedule of home/away matchups can be found below.