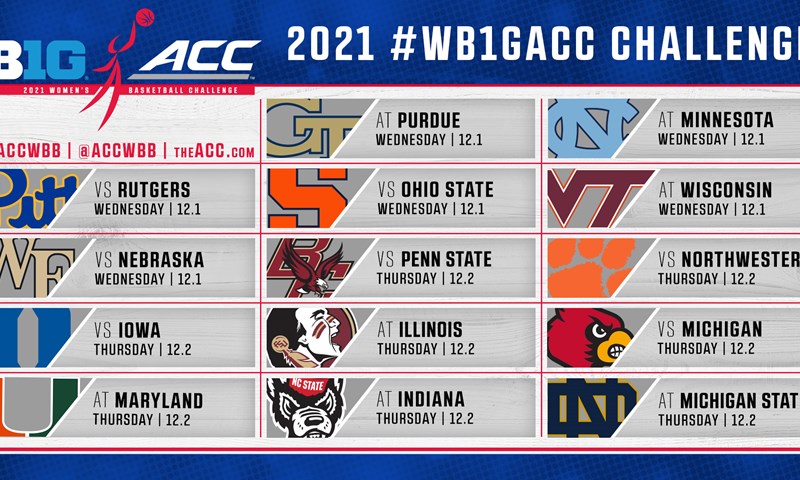 GREENSBORO, N.C. (theACC.com) — Two of the nation’s premier women’s basketball conferences will again square off for hardwood bragging rights, as the matchups for the 14th Big Ten/ACC Women’s Basketball Challenge were announced Tuesday. The annual challenge, which was not played in 2020, returns this fall and offers 14 high-quality matchups for the seventh time.

The ACC owns a 9-1-3 all-time advantage in the Challenge, headlined by three outright titles in the last four years the event has been held. Additionally, the ACC stands a collective 94-70 against the Big Ten in the Challenge.

The 2021 Big Ten/ACC Challenge slate is highlighted by three matchups between ranked teams in ESPN’s Way-Too-Early Top 25, as sixth-ranked Louisville hosts No. 11 Michigan, No. 8 NC State travels to No. 7 Indiana in a rematch of the 2021 NCAA Sweet 16 contest between the programs, and 24th-ranked Notre Dame heads to No. 21 Michigan State.

Eight ACC women’s basketball teams were selected to compete in the 2021 NCAA Tournament, which was the most of any conference. It marked the third consecutive NCAA Tournament in which the ACC has had eight teams selected, leading all conferences each year, and matching the ACC record for teams in the field (2014-15, 2018-19).

The Big Ten and ACC have been among the most competitive conferences on the national women’s basketball landscape for many years, combining to send 17 schools to postseason play in 2020-21.

The complete schedule of home/away matchups can be found below.