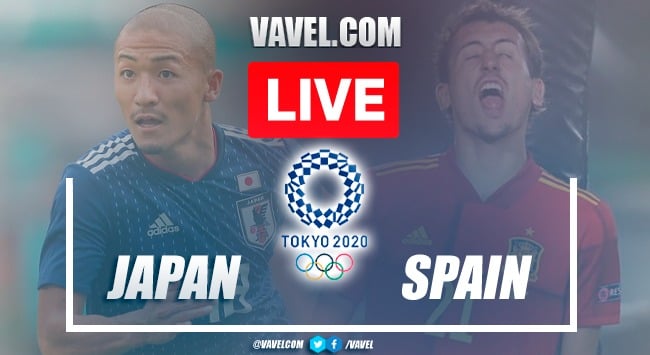 Spain will be a medalist in Tokyo 2020. La Roja’ gets its ticket to the final where it will dispute the gold against Brazil.

TANAKA Ao comes out and HASHIOKA Daiki replaces him.

GOOOOL. Spain gets the desired 1-0 after a service from Oyarzabal that is taken advantage of by Marco Asensio.

Spanish captain Jesús Vallejo is cautioned for a foul on Yuki Soma. Japan is awarded a free-kick

The second half of the TE begins. Spain substitution, Marc Cucurella goes out, Juan Miranda comes in.

First overtime ends. There will be a change of field. In case of a tie, the series will be defined by penalty kicks.

Rafa Mir wins it over the top but Tani keeps his shot out of the net.

Japan had it! Maeda wins in the middle of the mark and heads the ball over. The ball goes over

Regular time is over. There will be overtime

Four minutes of compensation are added

Mikel Oryazabal does not connect comfortably and continues to leave the hosts alive.

Japan is saved! In a double play Tani is already a factor in keeping his goal clean sheet.

Kubo! Japan takes the lead and the Merengue star puts Unai Simon to the test

Tani makes a great save. Spain misses it

The play was reviewed and the penalty was overturned. The Japanese defender reached the ball well.

Penalty for Spain! Maya Yoshida commits a foul on Merino. The action is reviewed by the VAR

Spain is saved! Ritsu Doan generates a shot that passes very close to the Spanish goal.

Action resumes for second half

The first half ends. The teams are tied at 0-0, Spain has been superior in these first 45 minutes.

One more minute of added time will be played

Takefusa Kubo presses on the baseline and forces the corner kick.

A great save by the goalkeeper, Rafa Mir was on his way to the goal, beating the back of the defense. The goalkeeper anticipates well

Mikel Oyarzabal connects well with his instep, the ball goes over the top. Spain is encouraged to try from half distance

Rafa Mir announced the first but was flagged offside

Out of place for Japan, the Japanese press forward

He misses it! Spanish captain Merino tries to get his head to the cross but the ball goes wide.

Foul on Oyarzabal on the edge of the area

Opening whistle for Spain vs Japan. A place in the final is at stake

Spain to play all its cards

Yuta Nayakama mentioned in a press conference that they will fight for the gold but are not under pressure to win it “Our will to win the gold medal is getting stronger and stronger, but we must recognize that we have come this far by taking one step at a time. We will try our best to get a victory over Spain.”

Do not miss a detail of the match Japan vs Spain live updates and commentaries of VAVEL.

How to watch Japan vs Spain Live Stream on TV and Online?

Watch out for this player from Japan

Midfielder Takefusa Kubo is a great promise of international soccer. At 24, he is one of Real Madrid’s promising stars.

The hosts opened with a 1-nil win over South Africa and in their second match had the best display of the group stage against the Mexican National Team, where they defeated the Tricolor 2×1. To close the three must-win games, the Nipponese beat the French national team 4-0.

Welcome to VAVEL.com’s coverage of the 2020 Tokyo match: Japan vs Spain Live Updates!

My name is Alejandra and I’ll be your host for this game. We will provide you with pre-game analysis, score updates, and news as it happens live here on VAVEL…