And that is the difference a goalscorer makes.

Not just any goalscorer, of course. The greatest in English football, right now. Mohammed Salah is in arguably the form of his life – which is saying something – and yesterday he made the difference in a match that may yet decide the outcome of the title.

Salah made one goal and scored another. Liverpool didn’t win, but could easily have lost. And who knows how important this point may yet be to Jurgen Klopp’s side come May? Margins between these teams have been frightfully tight in the past. 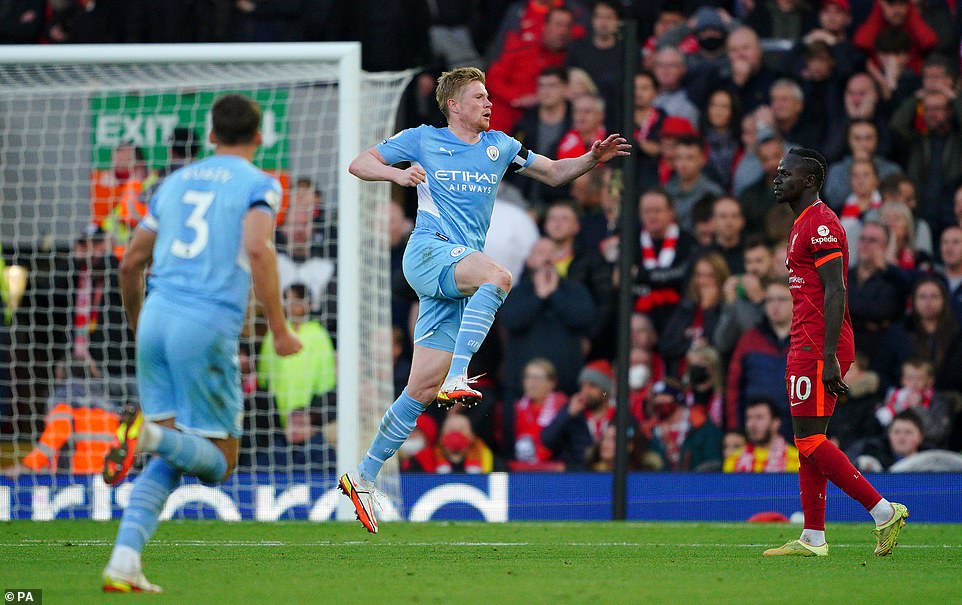 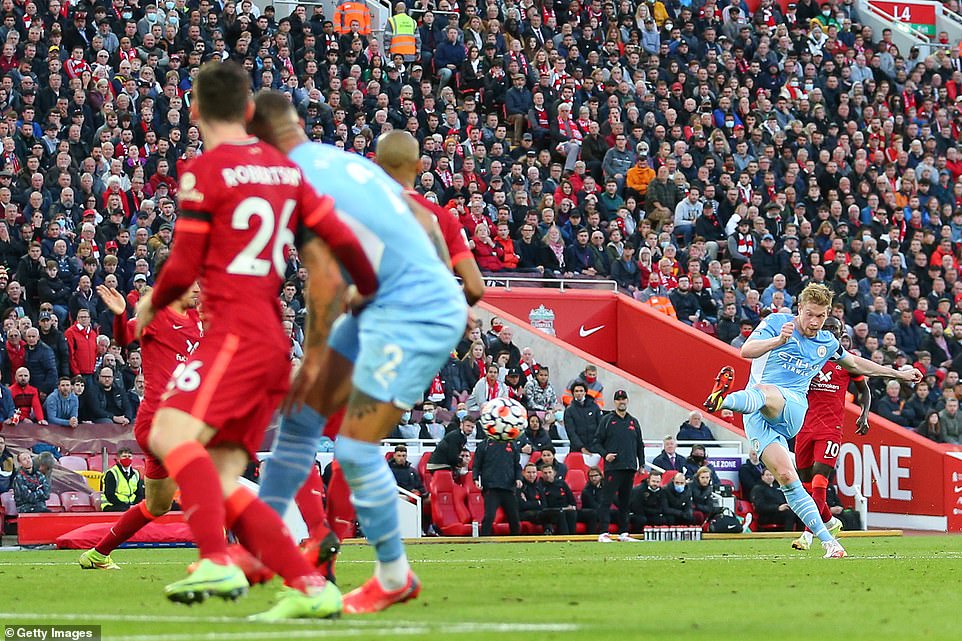 The Belgian star lashed home his shot from the edge of the Liverpool box, finding the net via a deflection off Joel Matip’s knee 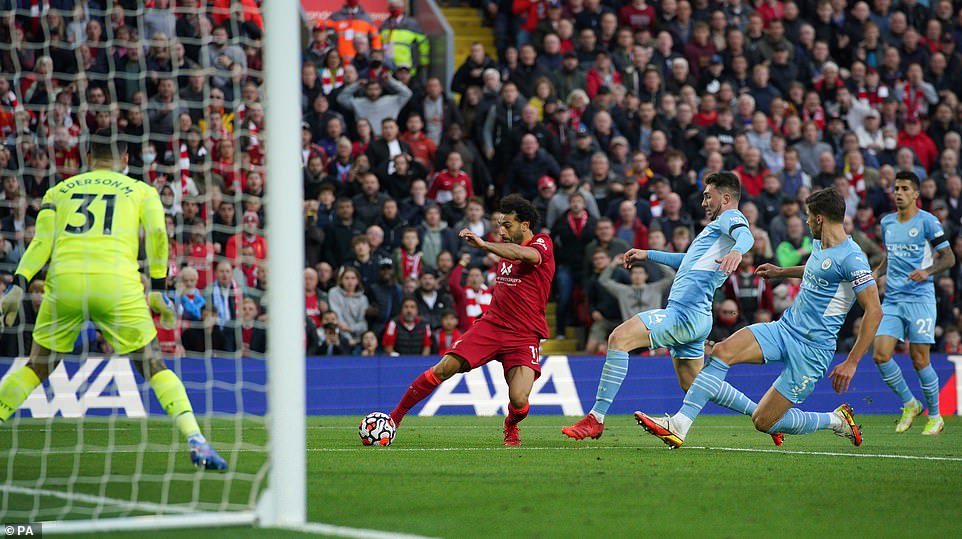 Would a prolific match-winner have settled this game for Manchester City? We will never know. We can speculate, however, that once again there is a lot of heavy lifting in front of goal being done by their forward midfielders when Liverpool keep it simpler.

Take their first goal. It came about because when Liverpool counter-attack they have not one, not two, but three strikers, all exceptional finishers, haring towards the opposition penalty area. Manchester City have wonderful attacking potential, too.

Yet often, they have to find an intricacy, a scenic route, where Liverpool aim for the bullseye. Manchester City dominated the first-half, yet had nothing to show for it. When Liverpool came alive after half-time, they took the lead twice only to be pegged back by City’s impressive resilience. 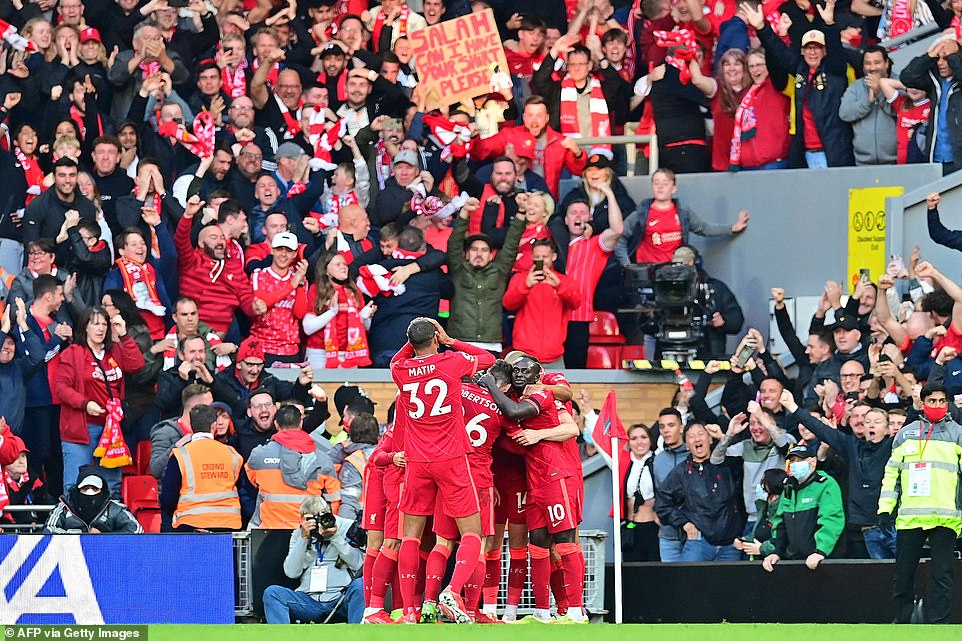 What a brilliant 45 minutes that second-half was. It had football of the highest quality, its own mini goal of the season competition and a tackle by Rodri to prevent a certain Liverpool winner that deserves equal billing in any highlights reel. Liverpool went ahead on 58 minutes, City drew level on 69.

Liverpool retook the lead on 76, City hauled them back five minutes later. The draw was a fair result, not least because City have a justifiable claim that James Milner should have been sent-off for a second bookable offence, three minutes before Liverpool’s second was scored. Pep Guardiola was booked for making this point rather too forcibly to referee Paul Tierney.

What makes a great game? Goals. And every one here was a cracker. Liverpool were transformed after half-time, which was perhaps a reaction to what was said after Klopp sprinted urgently down the tunnel at the end of the first-half having seen his players come a long way second best. Diogo Jota had already forced Ederson’s first save of the match, when Sadio Mane got Liverpool’s breakthrough goal. 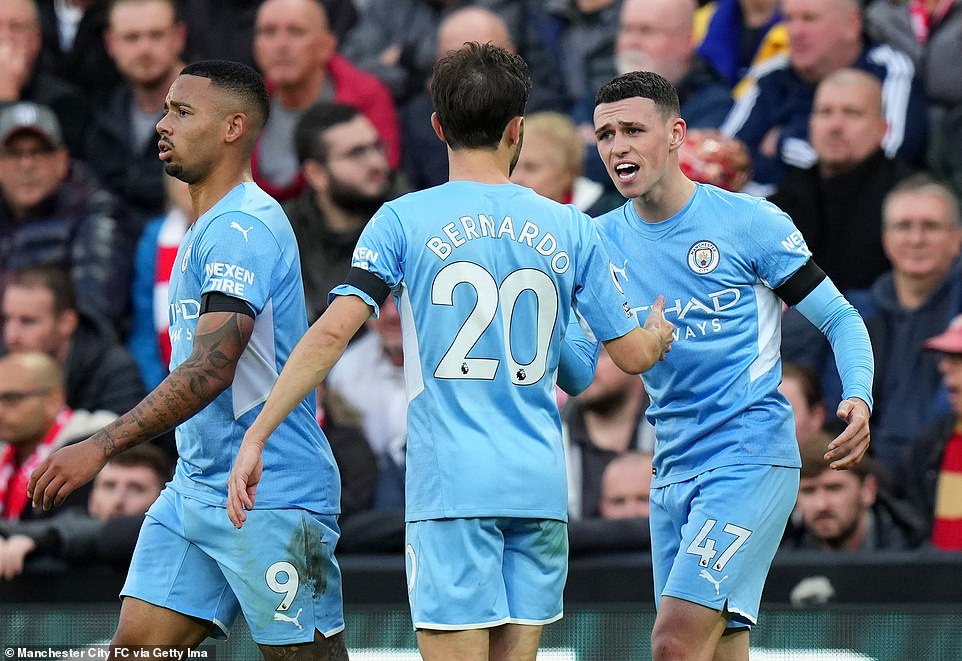 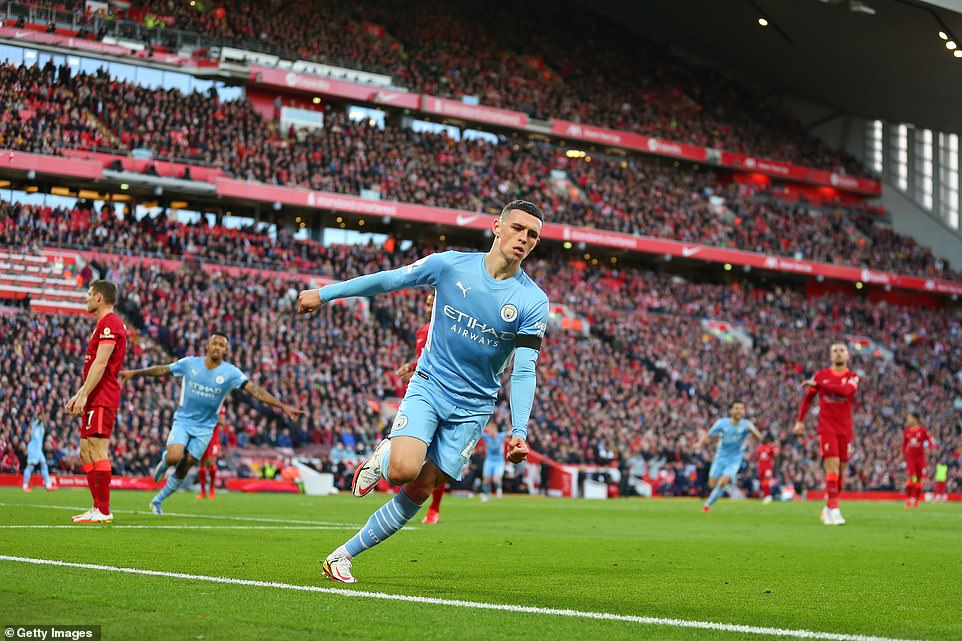 The England star, who enjoyed an outstanding afternoon, wheels away in celebration after restoring parity at 1-1 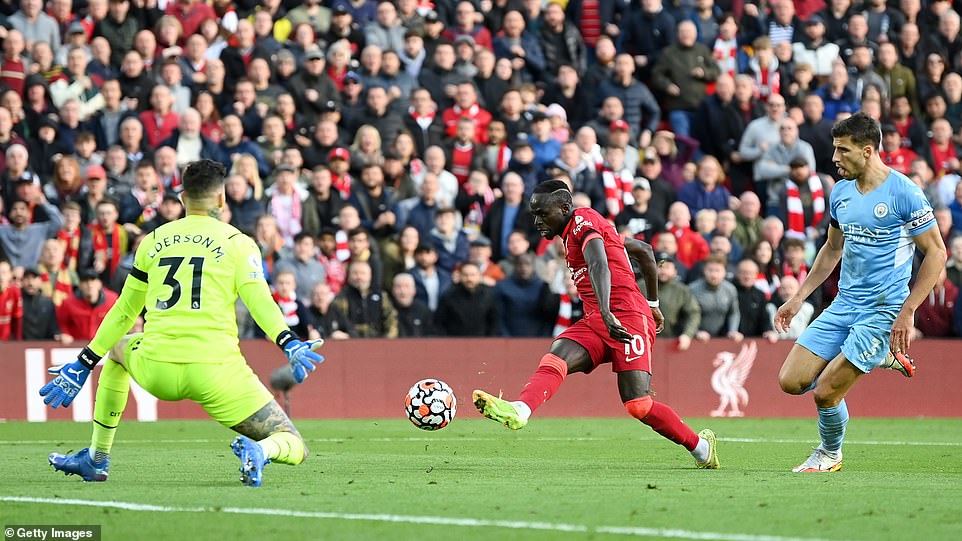 Salah was the architect. He won the ball inside his own half and set off on a run, skipping past the otherwise excellent Joao Cancelo and cutting inside. Ahead of him, Mane went one way, Jota the other – and that’s the beauty of Liverpool’s three-pronged attack. So many options; so much danger. Salah picked out Mane, whose finish, into the far corner, was quite magnificent.

As was Manchester City’s response. Of course, they do have a striker. His name is Gabriel Jesus and while it might be argued he would not necessarily make the starting line-up at Liverpool, he is still capable of moments of wonder.

Such as in the 69th minute here, when a fabulous crossfield run broke Liverpool’s back line leaving Phil Foden on the overlap in space. Jesus put him in, Foden finished as sweetly as Mane 11 minutes earlier. He was Manchester City’s prime attacking threat all game, and gave Milner a quite horrid time.

As for the goal of the match/season competition, it was probably won by Salah seven minutes later, an individual effort that would have made Lionel Messi proud. Salah left Bernardo Silva on his backside, he beat Joan Laporte once and then again for good measure and his finish was just perfect. What a talent he is. How can Liverpool even think of allowing his contract to run down?

Yet it wasn’t over. In the 81st minute, Foden cut the ball back to Kevin De Bruyne and his shot curled low past Alisson to tie again. Raheem Sterling was on his knees in front of the goalkeeper and actually ducked, thinking the ball was going over his head. A slight deflection off Joel Matip ensured it did not, but maybe City got lucky with the offside call. 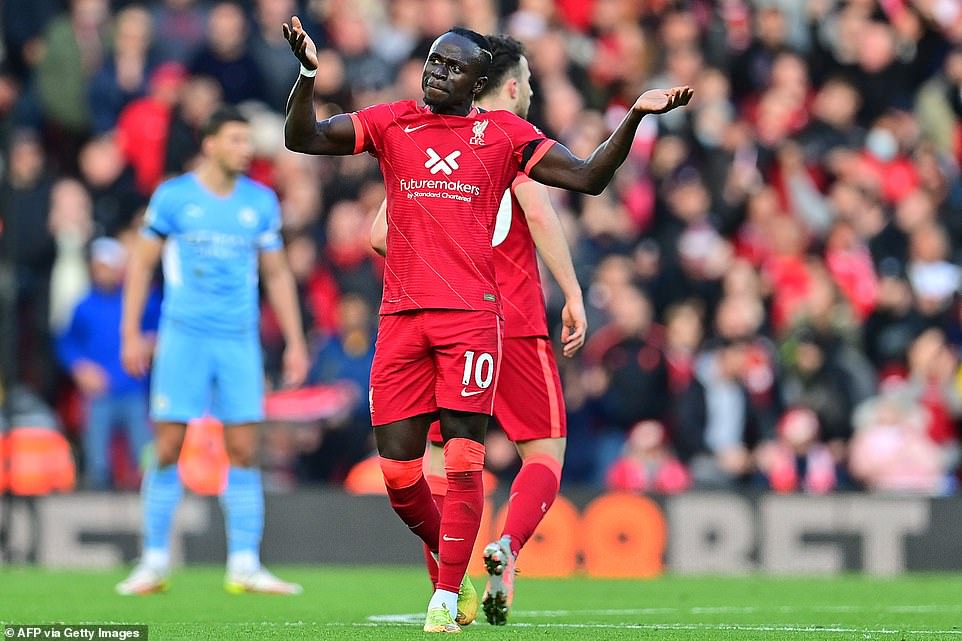 Not as lucky as Milner got, mind, having deliberately tripped Silva, having already been booked in the first-half for hauling down Foden. There was also a very strong penalty claim against him in the first-half, again after Foden got the better of him. Of course, penalty calls are subjective. Not so the foul on Silva. Milner stuck out a leg and sent the City man flying. The replays were unequivocal. Tierney bottled it, plain and simple.

He didn’t seem to fancy sending off a Liverpool man at Anfield. He wouldn’t be the first but if we’re talking VAR, clear and obvious errors and the like – ah, you’ve heard it all before. Guardiola had every right to be furious and Klopp suggested he knew his team had got away with one by replacing Milner with Joe Gomez almost immediately after..

Should Manchester City have also had a penalty before half-time? It certainly looked that way. There were 30 minutes gone when Foden got away from Milner, and not for the first time. Only Tierney seemed to think what Milner did was fair.

The first contact was made with an arm and that should surely have been a free-kick outside the area. Yet there was also foot to foot contact, as Foden continued his run and that seemed to take place just inside the penalty area. Tierney’s verdict? Nothing. It felt rather harsh on City. 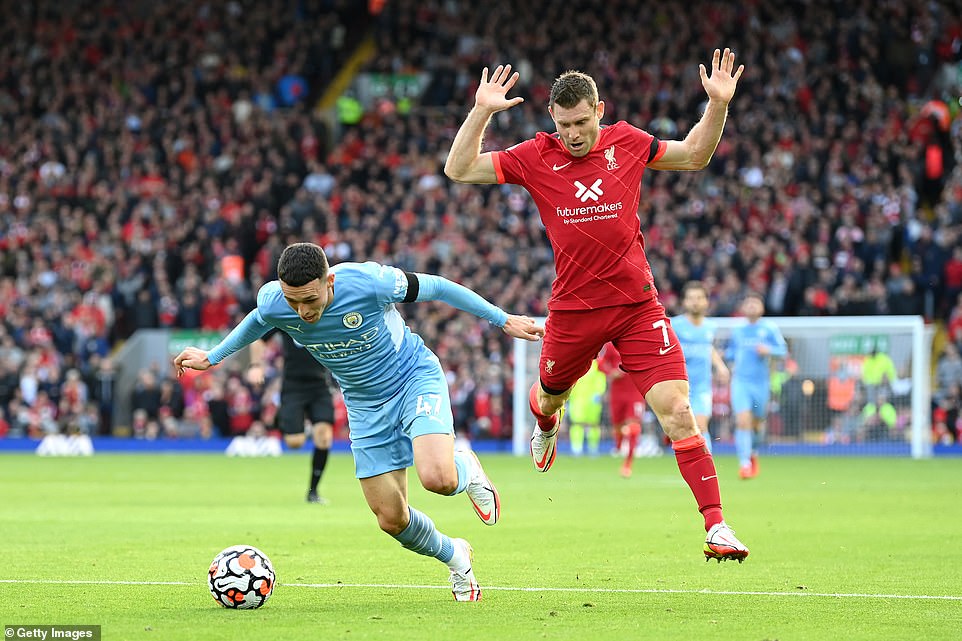 As was the goalless scoreline given the extent of their first-half domination. Liverpool started brightly, but within 15 minutes City were in charge. Milner, deputising for the injured Trent Alexander-Arnold, was given a particularly difficult time by Foden, and it did not help that Cancelo’s distribution and support work was of the highest calibre. Time and again, he arrowed in balls that had Milner desperately trying to recover and City began doubling up on Milner, with Jack Grealish peeling off into the same channel. Salah was increasingly dragged deeper to cover.

This was a continuation of City’s impressive display last weekend at Chelsea. Silva went on a brilliant, tricksy, pirouetting run, which outwitted Jordan Henderson, Andy Robertson, both Matip and Virgil van Dijk before finding Foden on the left. He took a touch too many, however, and Alisson smothered his shot.

Then, after 24 minutes, a superb run by Cancelo saw him play in De Bruyne who shot wide. Foden got in behind Liverpool again and sent over a deep cross for De Bruyne arriving late at the back post. He committed bravely to the diving header, but it was high – the best chance of the first-half wasted.

Yet Liverpool could have won it, too, much later. With three minutes remaining, Ederson missed a ball into the box, which fell at the feet of Fabinho, the open goal begging. Somehow, Rodri got his body in the way to block. His team-mates acclaimed his intervention as if it were a match-winner. In its own way, it was. 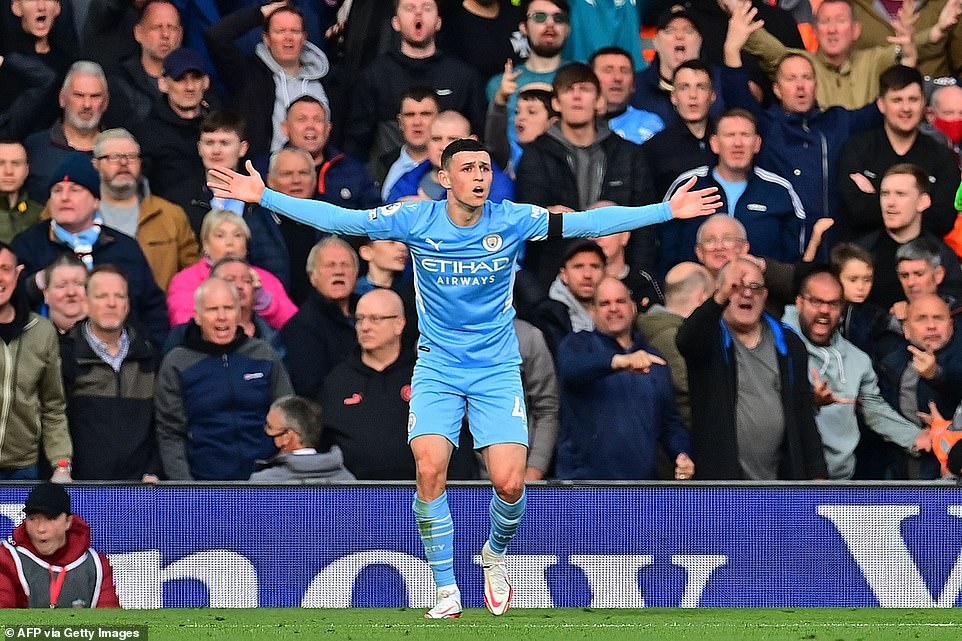 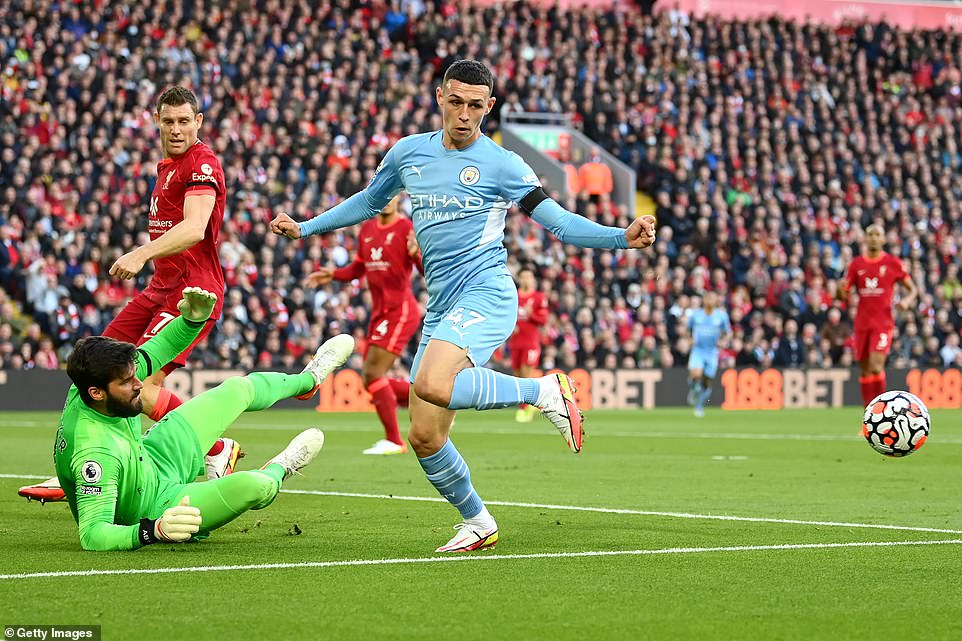 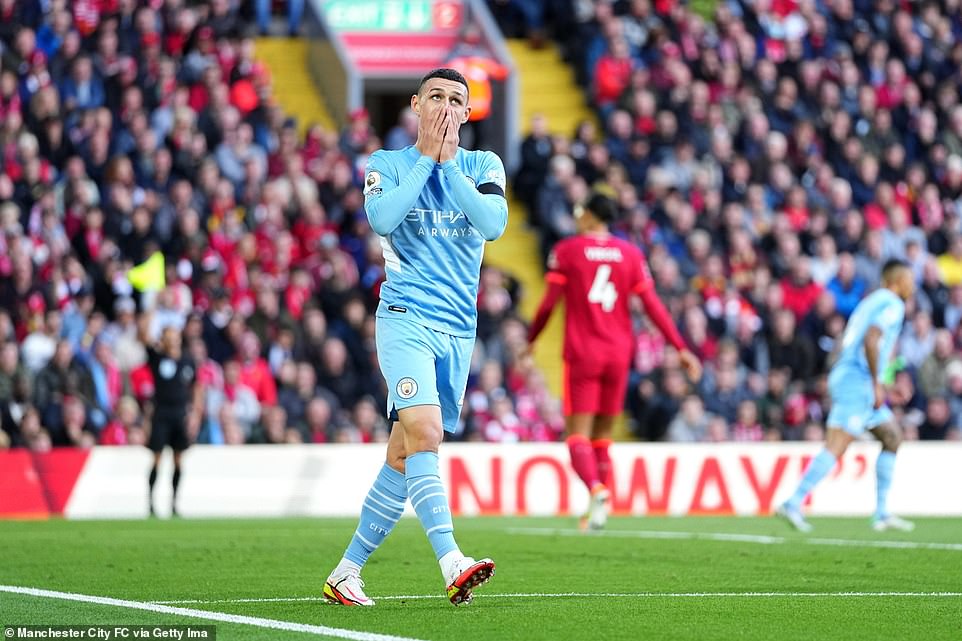 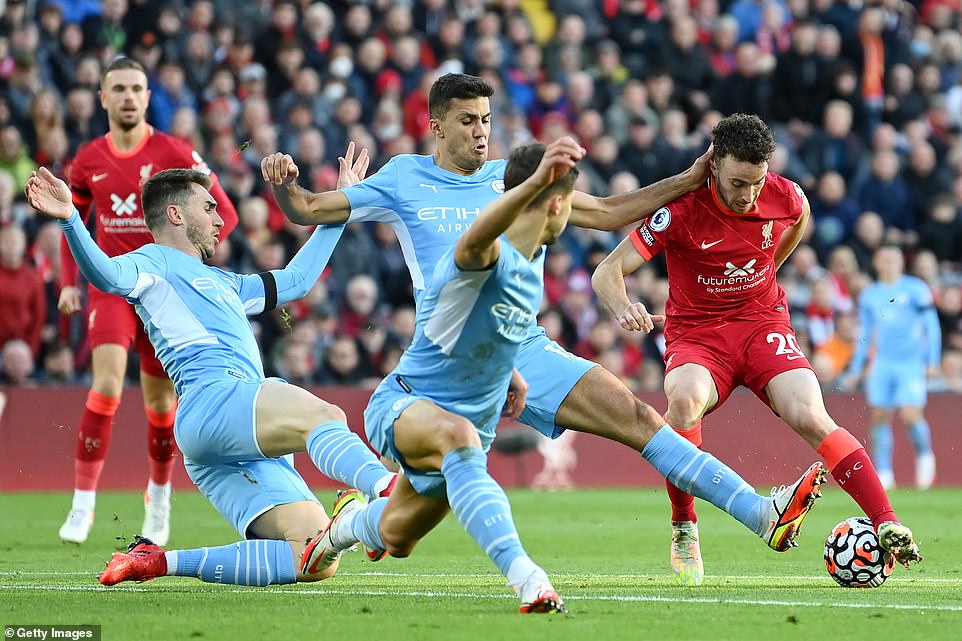