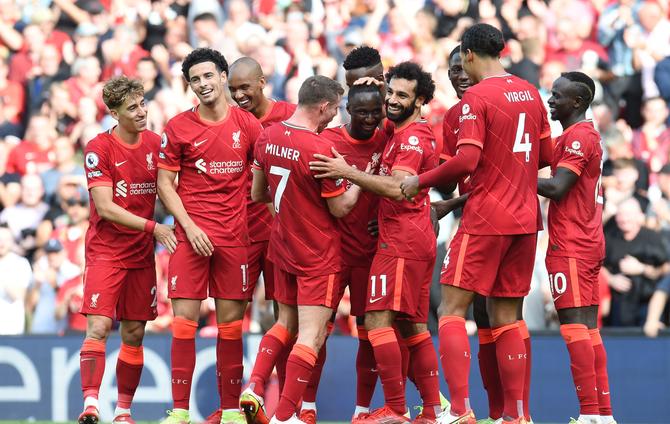 Liverpool have more chance of winning the Champions League than the Premier League, according to former Red Jose Enrique.

Jurgen Klopp’s side found themselves in a tough European group, with Milan, Porto and Atletico Madrid standing between them and the knockout stages.

However, the Reds edged past Milan 3-2 before crushing Porto 5-1 – their fifth win in their last six away group-stage games – and sit top of Group B ahead of their double-header with Diego Simeone’s side.

Meanwhile, Liverpool are the only side yet to lose in the Premier League this season and have recorded 15 points from their opening seven games – one fewer than leaders Chelsea.

But Jose Enrique, who was speaking exclusively to Stats Perform, sees a Champions League triumph as more probable than domestic success, given the struggles of some European heavyweights this campaign.

“We couldn’t have had a better start in what is probably the hardest group in the Champions League and we are doing really well now,” Jose Enrique said.

“We have everything on the right path to go through and it’s a competition that maybe we have more of a chance.

“The Premier League is longer, we have a lot of games. In the Champions League, it depends on the injuries.

“If you ask me what title that I believe we can win, I will go more for the Champions League over the Premier League.”

Liverpool twice squandered the lead in a 2-2 draw with Manchester City on Sunday, meaning they have failed to beat Pep Guardiola’s men in six out of the last seven top-flight meetings.

Given City’s embarrassment of riches, along with Thomas Tuchel’s impressive Chelsea squad, Jose Enrique believes – against his best wishes – that squad depth could cost the Reds in the Premier League title race.

“I really hope it’s Liverpool but if I’m honest with you, the problem with us is the lack of strength in the squad,” Jose Enrique responded when asked who would win the league.

“I believe we [Liverpool] are missing players up front. Look, I know we have four players that can perform there with [Roberto] Firmino, [Diogo] Jota, [Mohamed] Salah and [Sadio] Mane, but you cannot just rely on them the whole season.

“We obviously have strength there but if one of them gets an injury we may very well be struggling there, you know that’s reality.

“These kinds of teams like Chelsea and [Manchester] City, they do have it. The season is very long, we play Champions League, we play the two cups, it is not going to be easy.

“I hope it’s Liverpool, but I don’t know. I don’t want to say another team to be honest! Let’s say Chelsea.”