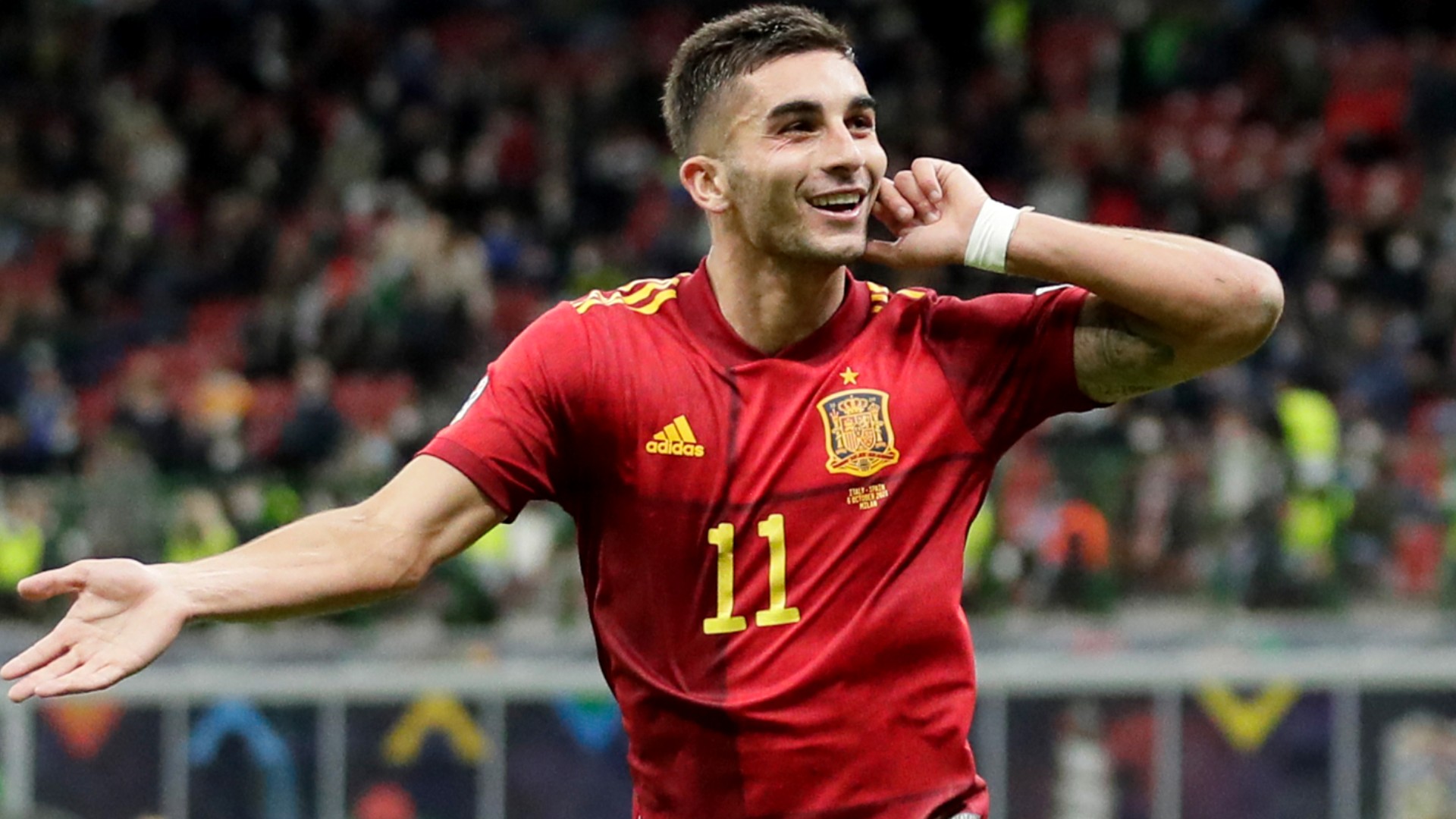 Spain got its revenge. Three months after losing a Euros 2021 semifinal to Italy in a penalty-kick shootout, La Roja got the better of defending European champion Italy in a UEFA Nations League semifinal, winning 2-1 in Milan’s Stadio San Siro.

In the process Spain’s victory also snapped Italy’s record 37-game undefeated streak which had lasted over two years. La Roja did it by scoring two first-half goals through Manchester City forward Ferran Torres, while Italy went down to 10 men for a red card shown to captain Leonardo Bonucci.

In an entertaining first half, Spain’s forwards had the clearest ideas on the night and Mikel Oyarzabal served up two tasty assists for Torres whose goals bookended the Bonucci red card. Without its two first-choice center forwards unavailable due to injury, Italy went with a false nine and its attack struggled. But that doesn’t account for Bonucci’s two yellow cards, first for protests and then a second for leading with a high arm in the 41st minute. Down a goal and a man, it was a tall mountain for Italy to climb.

Head coach Roberto Mancini brought in fresh legs for his shorthanded side in the second half, but it wasn’t enough to threaten Spain, which bossed the possession with the contribution of debutant Gavi, who became Spain’s youngest-ever player.

None of the subs made a difference for the Italians, but the home side still managed to nick a goal on a counterattack with less than 10 minutes remaining. Chasing Spain for the ball while a man down didn’t leave the Italians with any energy to muster another look at goal.

Spain advances to Sunday’s Nations League final where it will face the winner of Thursday’s other semifinal between Belgium and France. Italy will play the loser of that match in the third-place match earlier on Sunday in Turin.

90th min.: Five minutes of stoppage time, but Italy doesn’t look like it has any legs to get a final chance.

87th min.: Spain has won a couple of corner kicks and have milked this clock. Italy is going to need a bit of luck to get one last look at goal. Yellow card for Mikel Oyarzabal who committed a foul to stop an Italian counter.

81st min.: Italy goal! On a Spain corner, Italy goes on the break and Federico Chiesa feeds Lorenzo Pellegrini one-on-one against the ‘keeper and easily slots home. Italy has life. All with 10 men. Gavi’s out for this heated finale. Sergi Roberto on for him.

78th min.: What a save by Gigi Donnarumma on a shot by Marcos Alonso. Great work by Yeremi Pino on the right to get the ball to him. If Italy make a miraculous comeback that save will be big.

75th min.: SUBS – Bryan Gil comes on for Pablo Sarabia in a wide attacking position. Mikel Merino is in for Koke in central midfield. It looks like Gavi is going the full 90 here.

71st min.: Giorgio Chiellini is 2 for 2. He asks for two yellows and he gets them. This time it’s Spain’s Yeremi Pino. Meanwhile, Davide Calabria comes on for Nicolo Barella. Italy’s starting midfield, which was supposed to be its strength today, is off the field.

66th min.: Tough to see where the magic is coming from on this Italy side. Lorenzo Pellegrini came on for Jorginho earlier. But none of the subs have given Italy a spark.

65th min.: Yellow Card – Pablo Sarabia is in the books for a wreckless challenge on Giorgio Chiellini.

63rd min.: What a chance for Spain! Cross by Yeremi Pino from the right and Oyarzabal’s header just misses the left post.

61st min.: Chiesa hits the base of the right post, but he’s offside on the through ball. Italy coach Roberto Mancini is suffering on the sideline.

58th min.: Italy subs – Moise Kean and Manuel Locatelli are on. Insigne and Verratti are off.

53rd min.: Spain’s dominating possession and Italy is chasing … with 10 men. Mancini is going to have to bring in fresh legs soon.

49th min.: After a collision with Jorginho, Spain forward Ferran Torres picks up an injury and 18-year-old Yeremi Pino comes on. Another debutant. We’ll see how this impacts Spain’s attack.

46th min.: Giorgio Chiellini is on for Italy to start the second half. He comes on for Bernardeschi, who hit the post but was otherwise ineffective.

Halftime: Fantastic half of soccer between two powerhouses, but it’s going to be impacted by the red card shown to Italy’s Leonardo Bonucci late in the first half. Spain clearly has the better forward pairing on the field with Mikel Oyarzabal and Ferran Torres combining to perfection on two chances. There’s no cohesion between Italy’s front men and the Azzurri’s most dangerous chance was fluffed by Lorenzo Insigne who went for finesse and accuracy. The Italians’ 37-game undeeated streak is in real danger.

This is the first time Gianluigi Donnarumma has conceded two goals while playing in a match for Italy.

He’s been playing for the national team for FIVE years 🤯🇮🇹 pic.twitter.com/vaTB7uJo4x

46th+ min.: Goal Spain! That combination again: Oyarzabal to Torres, who heads it to the far post past Donnarumma. Spain have a shock 2-0 lead at the break.

45th min.: Yellow card for Cesar Azpilicueta who stops a dangerous attack from Emerson. And on the set piece, Insigne is all alone but can’t control and get the ball past the ‘keeper.

41st min.: Italy down to 10 men. What a turn of events! Italy’s captain is sent off for a second yellow! The referee indicates that he’s getting the second yellow for leading with his elbow.

37th min.: What a game this has been. Now on the other Spain gets a shot on goal. It’s Oyarzabal with the left-footed shot on goal. Not enough power on it.

35th min.: Best chance for Italy! Lorenzo Insigne misfires poorly wide right with the ‘keeper at his mercy. He was trying to guide it into the far post. If only Italy had a center forward who could finish.

34th min.: Post! Italy’s Bernardeschi finds space down the right and he fires on goal.

30th min.: Italy’s captain, Leonardo Bonucci, gets a yellow for protests. Some frustration and impatience is already seeping into the Italian side. Bonucci fires a first-time shot into the second tier.

27th min.: Italy finally break up some of Spain’s momentum with a corner kick. Di Lorenzo gets a head on the ball but can’t redirect it on goal. It’s off target.

19th min.: Spain almost scores a second! A shot by Marcos Alonso goes through Donnarumma’s hands and off the post. Bonucci clears before the ball can bounce across the goal line. Are the fans in Donnarumma’s head?

17th min.: Goal Spain! What a finish by Ferran Torres on a cross by Oyarzabal on the left. Perfect service and perfect finish. Who needs a No. 9?

13th min.: Spain chance! Mikel Oyarzabal in the box with a shot in the box, but his attempt is blocked.

6th min.: And now it’s Italy center back Bastoni winning a ball in midfield and pushing up before firing on goal. Didn’t see that coming from the central defender.

4th min.: Spain left back Marcos Alonso launches a long ball for Mikel Oyarzabal, but he can’t catch up to it. On the goal kick, the Milan crowd is whistling Gigi Donnarumma. They’re not going to let it go.

1st min.: We’re off and Spain is already on the ball. Gavi gets a touch.

2:48 p.m.: Milan crowd whistling during the Spain national anthem. We’re going to hear about this postgame.

2:25 p.m.: To put the Gavi start in perspective: He was born a few months after Giorgio Chiellini made his Italy national team debut.

Gavi starts for Spain and becomes the youngest debutante in the history of the Spanish NT, at 17 years and 62 days.

2:12 p.m.: This should add a layer of drama to tonight’s proceedings. The ex-AC Milan ‘keeper jeered by his former fans:

1:04 p.m.: Alvaro Morata can’t take the field with Spain this time, but the Italy-based forward made sure to visit his national team colleagues:

Center forwards Ciro Immobile (Lazio) and Andrea Belotti (Torino) are out because of injury and so Mancini has opted for a “false nine.” Although he has promising Giacomo Raspadori (Sassuolo) and Moise Kean (Juventus), who are their replacements on paper, Italy will be counting on Juventus star Federico Chiesa to be the goal-scoring catalyst together with Lorenzo Insigne and Federico Bernardeschi , who all start from deep.

MORE: How Italy’s unbeaten run stacks up against history

Alessandro Bastoni , 22, also gets the start at center back over 37-year-old veteran  Giorgio Chiellini .

Spain will also not have a traditional center forward on the team with injuries leaving out Alvaro Morata and Gerard Moreno. Winger Dani Olmo (RB Leipzig), Marcos Llorente (Atletico Madrid) and Barcelona duo Jordi Alba and Pedri also are unavailable. The front three will include Mikel Oyarzabal , who has started the season strong with Real Sociedad.

The big surprise is Barcelona teenage midfielder  Gavi , who was a surprise callup, being given the start and becoming the youngest-ever Spain player, breaking a mark set in 1936.

How to watch Italy vs. Spain

The match will be broadcast in English (ESPN2) and Spanish (UniMas, TUDN) in the USA with both channels available to stream on fuboTV , which offers a free 7-day trial to new users . A reduced capacity sellout of 37,000 is expected at Milan’s San Siro.

This semifinal boils down to which team is going to have the tougher time overcoming the various absences. It’s hard to ignore the quality that Spain will be missing without 4-5 starters in Marcos Llorente, Pedri, Gerard Moreno, Dani Olmo and Alvaro Morata. For that reason, the balance should tip in Italy’s favor, with the Azzurri potentially returning 10 of the 11 starters from the match against Spain in July, including the Azzurri’s established midfield trio.

There are enough in-form attackers on both sides that two goals should not be a reach for this game. Italy and Spain are strong attacking sides known for their ability to create scoring chances. They should not disappoint.