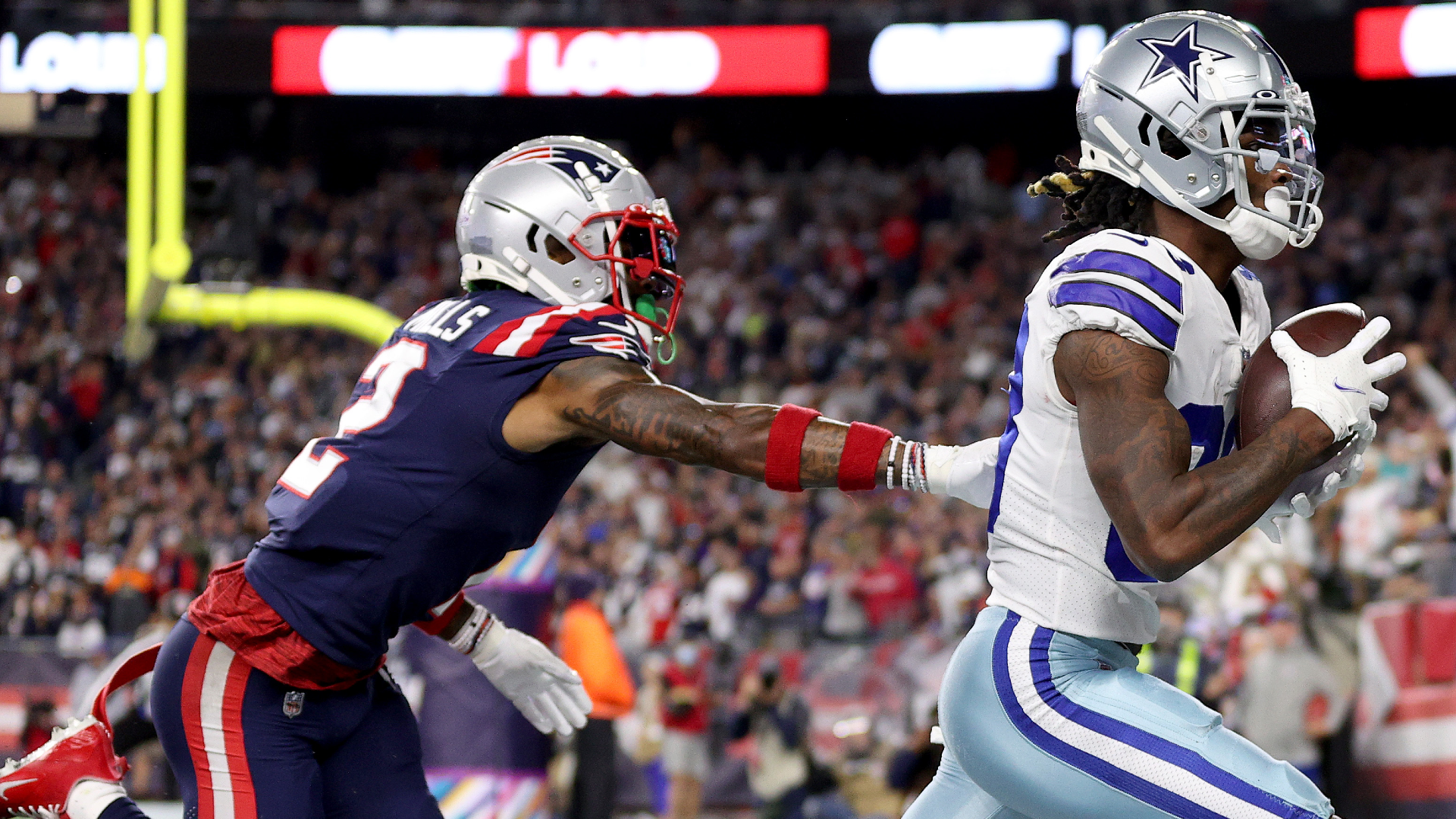 It took overtime and some heroics from Dak Prescott, but the Cowboys survived a late-game comeback by the Patriots on Sunday to notch their fifth straight win, 35-29 in overtime.

The Cowboys had another dominant offensive outing, totaling 567 yards, including 455 passing from Prescott. It was their second consecutive game with more than 500 yards of offense.Prescott targeted nine different receivers, most prominently CeeDee Lamb, who hauled in nine catches for 149 yards and two touchdowns, including the OT game-winner. Tight end Blake Jarwin caught Prescott’s other score.

Dallas played well on defense, forcing two turnovers and sacking Mac Jones twice. One of the turnovers was a fourth-quarter pick-six by cornerback Trevon Diggs, who expanded his league lead in interceptions.

Not everything was so great for Dallas, though. It converted on just 3 of 13 third-down attempts and was penalized 12 times for 115 yards.

New England was less dominant but made timely plays. The most notable one was a 75-yard strike from Jones to Kendrick Bourne immediately following Diggs’ pick-six to give New England a 29-26 lead. The Patriots were bailed out by Dallas’ numerous penalties, the defense’s stops on third and fourth down and a missed field goal kick by Greg Zuerlein.

MORE: How the Patriots have catered the offense to Jones and helped him succeed

The win moves Dallas to 5-1 and widens its lead atop the NFC East with a bye week for the team up next. The Patriots drop to 2-4 but remain in second in the AFC East. A matchup against the Jets is set for next week.

Sporting News tracked live scoring updates and highlights from Cowboys vs. Patriots on Sunday. Below are complete results from the NFL Week 6 game.

7:50 p.m.:  The next score wins and Dallas is firmly in field goal range after a 7 yard pass to Lamb.

7:43 p.m.:  New England goes three-and-out after the nice first down on the first series. The Patriots now punt it away. Dallas takes over at its own 20.

7:38 p.m.:  The Patriots will possess the ball first in OT. If they score a touchdown, they win.

7:33. p.m.:  Prescott hits Lamb wide open down the field to the New England 31 to bring up fourth-and-1 with 24 seconds left. They call a timeout and bring on Greg Zuerlein to tie it up.

7:23 p.m.: TOUCHDOWN NEW ENGLAND.  The first play after the INT, Mac Jones hits Kendrick Bourne and targets Trevon Diggs again. Bourne was wide open down the field and hit in stride for the 75-yard score. New England hits on the two-point conversion and it’s  New England 29, Dallas 26  with 2:05 left

7:17 p.m.: PICK-SIX DALLAS.  Trevon Diggs takes it to the house to expand his NFL lead in INTs. Also his sixth straight game with an INT to start the season, closing in on the all-time record. Dallas 26, New England 21  after the two-point conversion attempt. 2:27 remaining in the game.

7:11 p.m.:  Dallas gets called for its 11th penalty and 100th total yards on an offensive holding. Drives the Cowboys back to the New England 43 looking at second-and-12.

7:08 p.m.:  Following the touchdown, Dallas is looking at third-and-2 from from the New England 44. He finds Cedrick Wilson for a first down to move the chains with 4:40 and counting.

7:02 p.m.:  The Patriots seem to have found something that works with its running game. Looking at first-and-goal after several good runs.

7:01 p.m.:  Another big play for New England as Damien Harris barrels through and breaks several tackles for a 22 yard gain on the ground.

6:59 p.m.:  New England has crossed midfield and is facing third-and-9 from the Dallas 48 with just over 10 minutes left.

6:56 p.m.:  Following the field goal New England calls timeout on first-and-10 with over 11 minutes left, leaving them with just one remaining.

6:48 p.m.:  The fourth quarter starts with a bang. Prescott hits Lamb for 27 yards on second-and-11 to reset the downs. Follows that up with three straight incompletions to force a field goal.

6:34 p.m.: TOUCHDOWN DALLAS.  No doubt about this goal line play as Prescott hits Lamb in the back of the endzone who drags his feet for the score. Dallas takes the lead with 4:49 left in the third.  Dallas 17, New England 14.

6:24 p.m.:  Dallas has marched nicely following the punt that backed them up to their own end zone. Prescott hits Schultz for 20 yards and the Cowboys cross midfield.

6:20 p.m.:  New England goes three-and-out for its second straight drive after reaching third down just once in the first half. Pats punt it away to the Dallas 9.

6:14 p.m.:  Dallas stares at third-and-9 and Prescott fires over the middle but it’s broken up, The two teams trade three-and-outs.

6:10 p.m.:  A sack by Randy Gregory forces a three-and-out and New England punts it away. Dallas starts on it own 31.

The Cowboys ran 41 plays in the first half and amassed 235 total yards. But they were also penalized seven times for 76 yards and are just 1-for-6 on third down.

New England ran 17 plays and is averaging nearly 7.5 yards per play. The Pats have 128 total yards and have also forced two turnovers so far.

5:48 p.m.: Dallas originally gets called for a TD but after review, it’s overturned. The ruling is that Prescott lost possession crossing the plane and New England recovered it for a touchback.

5:47 p.m.:  Prescott tries to sneak it in but comes up short to bring up fourth-and-goal. The Patriots call a timeout.

5:43 p.m.:  Prescott hits Cedrick Wilson down to the 1-yard line but Dallas can’t punch it in and is looking at third-and-goal with 2:00 left.

5:39 p.m.:  New England can’t convert and they line up to punt but it’s blocked by Dallas. Another defensive/special teams turnover for the Cowboys. Dallas ball from the New England 17.

5:35 p.m.:  With 5:21 left in the second quarter, the Patriots are looking at their first third down of the game. They call a timeout looking at third-and-9 from their own 27.

5:29 p.m.:  It’s third-and-11 from the New England 12 and Dallas comes up just short of a touchdown after the ball is knocked away after the catch. Fourth down coming.

5:26 p.m.:  On second-and-10, Dallas converts again, this time on a pass out of the backfield to Elliott. Cowboys are at the New England 26.

5:22 p.m.:  The Patriots turn It over after Randy Gregory forces the fumble on the strip sack and the Cowboys recover. Dallas takes over at its own 48.

5:20 p.m.:  Mac Jones airs it out and finds Nelson Agholor on second-and-5 for 27 yards. The Patriots are now squarely in Dallas territory at the Cowboys’ 25.

5:14 p.m.: INTERCEPTION NEW ENGLAND.  Prescott was looking for Wilson in the end zone but ends up getting picked off. New England takes over at its own 25.

4:58 p.m.:  The Cowboys are looking at their second fourth-and-short of the day from their own territory. It’s at their 47 and this time its good as Ezekiel Elliott breaks off an outside run and picks up just enough. First-and-10 from right at midfield.

4:52 p.m.: Dallas cornerback Trevon Diggs gets flagged for 15 yards. Puts the Patriots on the Dallas 20 and they look to score again.

4:45 p.m.: TOUCHDOWN COWBOYS.  Prescott hits tight end Blake Jarwin wide open in stride in the back of the end zone. It’s Dak’s 14th TD pass of the year and it ties the game. He was 6-for-6 to five different targets.  Dallas 7, New England 7.

4:37 p.m.:  TOUCHDOWN PATRIOTS.  The Patriots line up for a trick play with Damien Harris lining up under center for the snap. He keeps it and barrels through for 4 yards and an early score. New England 7, Dallas 0  with 10:20 left in the first.

4:34 p.m.: The Cowboys lose their challenge. Ezekiel Elliott is ruled down by contact and it’s a turnover on downs for the Cowboys. New England takes over on the Dallas 34 and primed to score early.

4:28 p.m.:  Dallas was staring at first-and-20 from its own 15 and they get it all the way down to fourth-and-1. The Cowboys go for it and don’t get it, but Dallas coach Mike McCarthy challenges.

How to watch Cowboys vs. Patriots

The Cowboys vs. Patriots game is scheduled to start at 4:25 p.m. ET. It will be broadcast by CBS on Sunday, with KTVT the home of CBS in Dallas and WBZ-TV the network in Boston. You can also stream the game live with fuboTV, which offers a free seven-day trial .

In Canada, viewers can watch Cowboys vs. Patriots on DAZN, which has rights to every NFL game .