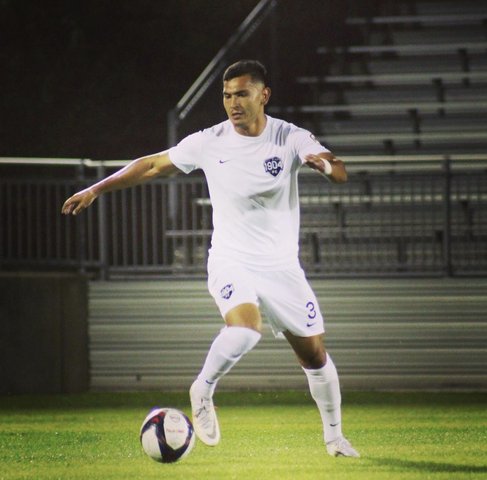 After signing with 1904 Football Club in San Diego this summer, Turlock High School and Stanislaus State alum Desmond Madrigal achieved a dream he first began chasing when he was just four years old.

With a father who once played professional soccer in Mexico, Madrigal was learning to kick a ball as soon as he could walk. He flew up the ranks of recreational and travel ball leagues in his youth, playing one year of varsity soccer as a sophomore at THS before participating in the San Jose Earthquakes Academy during his junior and senior year.

After graduating as a Bulldog in 2015, Madrigal earned his psychology degree from Stanislaus State while playing soccer for the Division-II Warriors with dreams of going pro upon finishing school. After turning down San Jose State to play in Turlock, Madrigal was able to play alongside his brother and remain close to his family and friends.

“My family got to watch me play every weekend, which hadn’t been the case for the past two years when I was traveling to play at the San Jose academy,” Madrigal said. “Right away when I was done after my senior year, I was like okay, I’m done with college soccer officially. I need to find my next thing and that’s a pro contract.”

After his senior season in October 2018, Madrigal began training for his first pro combine set for January 2019. It was a great experience, he said, with scouts and coaches of professional soccer clubs from all over the country watching. All it took was one showing for Madrigal, who was offered an opportunity with Pittsburgh Riverhounds SC, a United Soccer League team out of Pennsylvania.

Madrigal was faced with a dilemma: his dream was one decision away from coming true, but he still had several months of college left at Stanislaus State.

“Do I go out there now and finish school later? I talked to so many people about the decision and decided to stay and finish school,” Madrigal said. “It was frustrating, because I always wondered if that one chance to play in Pittsburgh was it.”

After graduating from Stanislaus State that spring, Madrigal spent the next two years trying out for teams at pro trials while keeping his skills sharp by playing for Turlock’s semi-professional soccer team, Academica SC. He was able to showcase his talents for other pro teams that Academica played in exhibition games, never giving up on his dream even as the months passed by.

Eventually, he got the call from 1904 FC and signed on to play the fall season with the team in August.

“Now that I’m here, I don’t have to look back on that Pittsburgh offer and feel like I pissed it away,” Madrigal said. “I’m glad that I finished school and got my degree, because yes, I love what I’m doing now as a professional soccer player, but at the same time it’s also the most uncertain career I’ve ever been a part of in my life.”

Madrigal has a lot to be proud of, from making the difficult decision to forgo his chance to play professional soccer in order to pursue his education, to persevering through two years of pro trials and COVID in order to make it to where he is today.

“It was the best feeling knowing that all the work I’ve done since college, even since I was four years old, didn’t go to waste,” Madrigal said. “My brothers always told me I don’t have to prove anything to anyone, but for me signing a pro contract was the only way I knew how to thank my family and anybody else who has been a part of this journey of mine.”

Desmond got the call from 1904 FC on a Thursday and was in San Diego by Sunday, he said, marking the first time he’s lived outside of Turlock in his life. The game is faster in the pros, he said, but he’s already made an impact in his eight appearances so far thanks to a game-winning goal scored in the final minutes of a close game earlier this season.

Madrigal will find out if he’ll be signed again following this season, but until then he’s enjoying the hard-earned results of the past two decades.

“It was a great way to start a career,” Madrigal said. “Leaving Turlock was always part of my plan; I was always ready for something new. But the fact that I get to do it and play soccer makes it even better.”